I am looking through some older magazines, and making a trip to memory lane. Yesterday I brought up a bunch of old gaming magazines from the basement, and I thought I go through them, one by one, see how things were, and how they changed throughout the year. I think I will do one magazine a week.

Note: for privacy reason I won't take pictures of the magazine, but I will put screenshots of the games in the posts. I will also include GOG links and archive.org links for the games that are available in some form or another.

I remember that in April 1995, I and my brother bought our first PC gaming magazine. A stormtrooper was on the cover, for the game Dark Forces. It wasn't cheap back then, but we would laugh at the price now, of course. My brother is a big Star Wars fan, he saw all the movies in cinema, even the original trilogy, and I was a fan of the trilogy as well.

They were from ECTS London, which was the European Computer Trading Show from 1989 till 2004 (Wikipedia). Back then when there were the so called booth babes and nobody cared… ah the good old days.

Look at some of the bigger games.

Codemasters' Micro Machines 2, a top down racing game, in your home environment like kitchen, living room or bathroom.

Activision worked on Mechwarrior - The Clans 2.

Interplay (R.I.P.) - near finished Dungeon Master 2, a first perspective dungeon crawler. They also made Stonekeep (GOG), as they wrote: a fully rendered, 3D wonder RPG on PC CD. And one of my all time favorite game: Virtual Pool!

Virgin's Heart of Darkness was a real treat back in the day! But there biggest hit of that year is Tilt, a realistic looking Pinball game in 3D!

when humans and dinosaurs lived together on Earth…

Amazing looking screenshots from the game, and a walkthrough on 3 pages, plus a 91% score. It's an adventure-strategy game from the creators of Dune, well worth trying it out. GOG has it with Windows and Linux support. 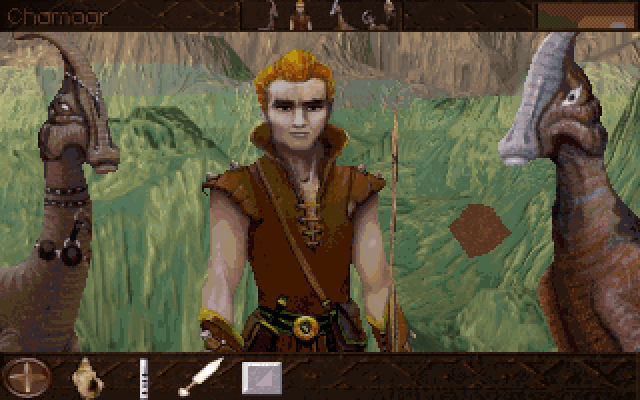 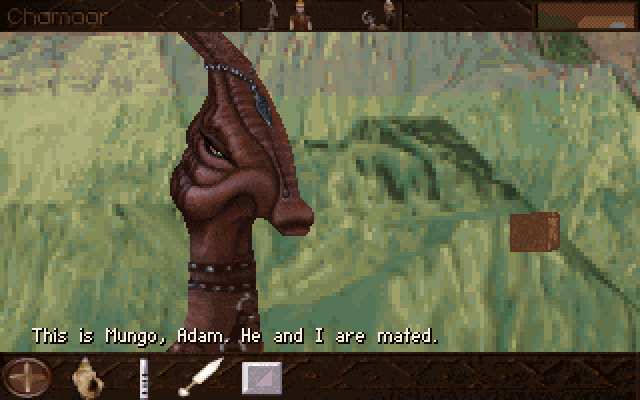 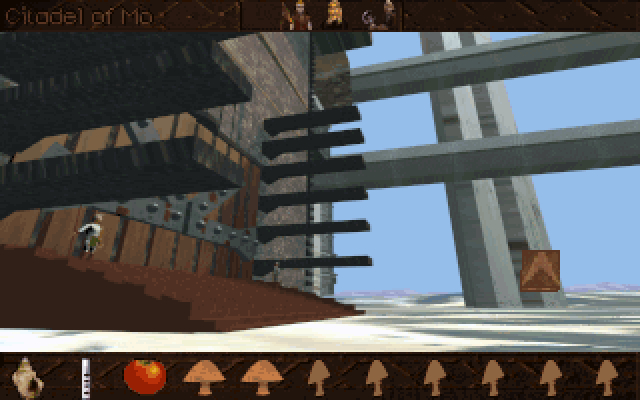 I will look forward to the day, when I don't get emotional looking at screenshots or that beautifully rendered stormtrooper on the cover…

This is a game that very much defined my childhood, probably the first FPS I have ever played (outside of Wolfenstein 3D). I played the demo dozens of times, going through the first mission and stealing the plans for the first Death Star. As a kid it was a dream, it was like being in a Star Wars story, right there.

Dark Forces was better than Doom in every way. Original sound effects from the movie, with recognizable MIDI music. We played as Kyle Katarn, a former empire officer turned mercenary, who now helps the Rebel Alliance. His story is one of the best that came out of PC gaming. Without spoiling anything, he became a legend…

The game while uses a similar engine to Doom, tried to move away from the "just maze" like level design, and there are plenty of open areas, different areas, like sewers and shit (and shit in sewers). The level design is typical 90s, you need to explore, but it's fun and rewarding.

The writer of the article praised the game for sounds, level design, gameplay and he said that Dark Forces is better in every way (wait, I just repeating myself, haha). One of the cool feature of that article was the keyboard shortcuts. As there are quite plenty, since you can look up/down, jump, crawl, etc. As the writer said: "LucasArts has finally created a Doom-like game that beats the King in most ways, THIS IS NOT A DOOM CLONE!".

Despite of the praise at the time, I still feel that Dark Forces is an underrated game, and 25 years later still lives in Doom's (and in a way Duke Nukem 3D's) shadow. 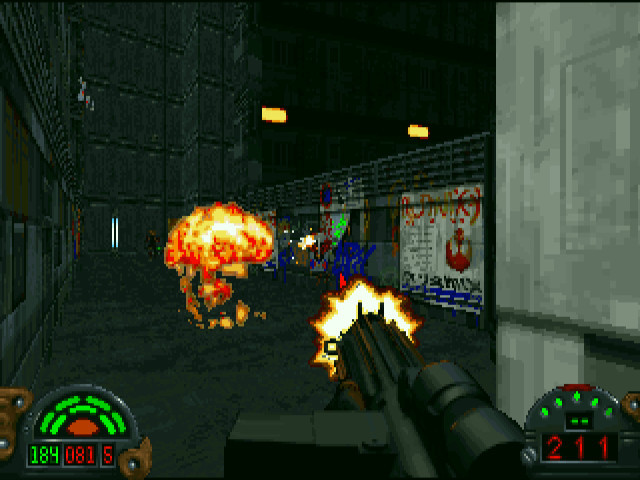 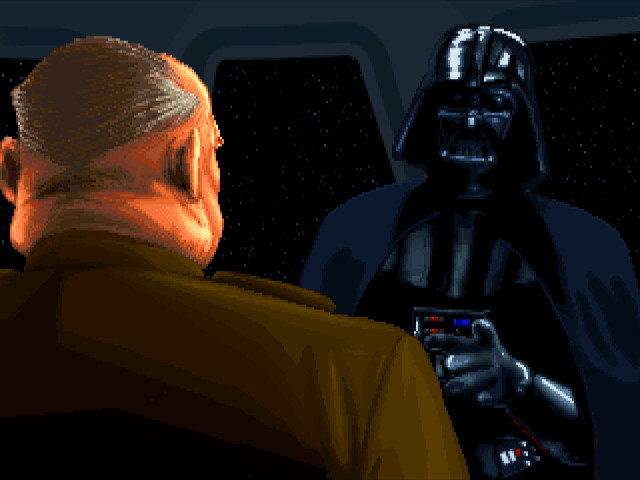 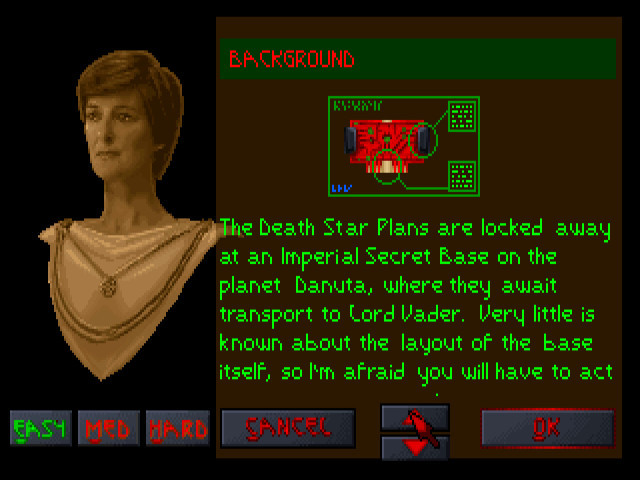 Luckily for new and old players, the game is available on GOG with a nice manual, which has all the secrets and walkthroughs for the missions (and you will need it!). If you are interested in gaming history, I urge you to check it out.

Simple, this is a game, that every first person shooter (and Star Wars) fan, has to own and play!

What I liked about that magazine…

It had games from consoles too. It was pre-Playstation and Xbox era, there were plenty of spaces for Sega and smaller stuff. PC games itself wouldn't fill up 48 pages.

I loved the cheat pages, this one had cheats for Syndicate (another childhood game of mine), Wing Commander 2, Might and Magic III, etc.

Then their was an arrival page for PC and Amiga games. Some very big ones, like X-COM: Terror of the Deep, which was the 2 game of the legendary X-COM series. Then there was Discworld, which plays in Terry Pratchett's world. Also for Trekkies, Star Trek: The Next Generation - A Final Unity.

On the Amiga side, there was Ambermoon, a dungeon crawler RPG. But this page biggest name was TFX, a millitary flight simulator, which was originally from PC!

Side-by-side review of two racing games: ATR All Terrain Racing and BC Racers. ATR was for Amiga and BC was for PC. Never played either of them. I was more of Wacky Racer

Then there was Pinball Fantasies Deluxe (GOG ) and Psycho Pinball (archive.org ). Both got good reviews. Four tables in each game. Back then pinballs were all the rage in the physical world, and computers just getting better at emulating them. In the long run playing on computers was the cheaper alternative, plus you didn't have to go out, and just invite friends to play. Both articles contained tricks for each table too.

U.S. Navy Fighters - a millitary airplane simulator, one of the first on CD! It had a 3 pages long review and a 95% score, plus shortcuts, because flight simulators uses the whole keyboard, hehe. Back then I really wanted to play this game, but now I just try to take off in Flightgear. xD

And there was a walthrough/review of Woodruff an adventure game.

The last page had some help for MK II, character moves including Friendship and Babality. Nowadays it just in the program, but back in the day, people discovered and (not) shared it with friends…

What's amazing about this particular magazine, that while we originally bought because of one game, I fall in love with games, and how people described games to an audience. Basically this was my first taste of journalism, and wish that people today who work in that industry would go back and re-read some of them, to see, how to write an engaging article about niche games, like a flightsim or a pinball game…

This was day #57 of #100DaysToOffload, where we write about different things on our personal blogs. Join the project or just read the blogs (we have RSS and coookiez!).