"You", will stalk you, until you finish it
a series I missjudged, but finished in a day, cause it's so good…

"You", a simple three letter word, yet in can held you like nothing else. It can mean a lot. The person you love, hate, adore, or just plain simple like. 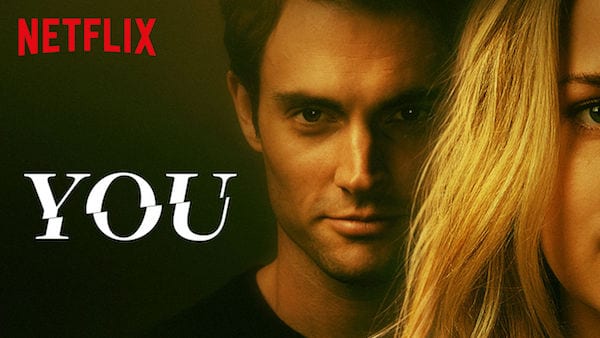 There is a Netflix series (thanks for the free month btw guys!), called You. It's about a young man, Joe (Penn Badgley), who meets a young girl named Guinevere, but everybody calls her Beck. Joe is a bookstore manager, and he also knows book restoration. At first I thought it will be a romantic comedy. Boy meets girl, girls tell her name, boy looks her up on the internet, and they randomly meet, and then fall in love. Boy one day tells the story, but instead of being mad at him, she just laugh and they kiss. After all didn't that Meg Ryan and Tom Hanks thought us in the 90s?

And yet after the first 10 minutes we know, that Joe is a stalker with some serious problem. He himself doesn't use social media, which means people can't really track him that much. And he perfectly sells the old-school, traditional guy, who loves books. By the 2 episode we know that Joe won't stop until he gets Beck, no matter who is in his way. Yet in a deep, weird way, we can not stop, but feel sorry for Joe. After all he is not a killer… yet.

"Why would I want to kill him? Who wants to kill people?" - Joe thinking about, his first feature victim.

Penn Badgley plays the psycho brilliantly, and I only saw him in Gossip Girl (hey, everybody watched it, I know you did!), or in Easy A, which didn't give him much room to show his range. But these voiceovers are amazing. Generally they say you should stay away from them, because it's better to show, then tell, but in this case, when you are in a mind of mentally ill person, it is vital to hear his thoughts.

What's sad in the whole story that Joe uses common practice for internet stalking: Facebook, Twitter and Instagram are the main components, and of course unlocked phones and easy passwords, like how you call your crush, secretly (but not so secretly, that you can't annoy your friends with it).

After the first season I absolutely don't want to be on social media, especially with my real name and face. I know it's sounds creepy that I want anonimity, but when I first started to use the internet, we used nicknames. The real name thing pretty much started with Facebook, and Online identity become a thing for everyone. Carefully managed, with beautifully shot pictures, and thoughtfully crafted words. Social media is the fakest thing in the world. I use it, in a way I am addicted to it. But I am still not on any major site. I don't want to be known. It's a lot of trouble keeping up appearance. To be the good guy, because your whole family is on Facebook. I know if I say something weird, or just something they might not agree with, I'd be in trouble.

People have a certain perception about you, based on what they know about you after a few decades, but let's face it, people change all the time.

What's also interesting about Joe's story, that we see, that he grew up without his family, but he had sort of a step-dad, who treat him not so nicely. Yet, here is Joe, and the neighbors little kid, Paco, who adores him and Joe always gives him books. He tries to be Paco's dad, the way he had a father. He really tries.

Joe of course doesn't see that his thinking is not normal, after all every villain thinks he is the hero of their story. Stalking, inserting yourself into somebody elses life, make the other person love you…

You. It's brilliant, disturbing and I cannot wait for season 2, which will come out on December 26. Luckily my free Netflix last until the New Year. Especially now that certain someone is back in Joe's life, and probably will get in Joe's way and won't back down…